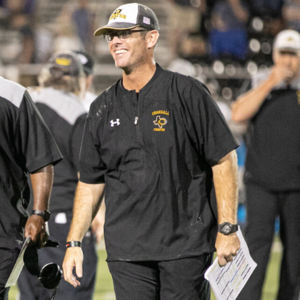 Crandall Head Football Coach and Athletic Director Joe Dale Cary, who last season led the Pirates to their first Regional Semifinal appearance since 1991, is moving to Hondo ISD. Cary has led the Pirate program the past six seasons and will serve in the same dual capacity as head coach-athletic director for the Owls.

The move is a homecoming of sorts for Cary, who has family in the San Antonio area. But the decision did come with mixed emotions regarding the hard-working group of players and students he has gotten to know so well.

“We love the kids and the community of Crandall and we have made some life-long friends here,” Cary said. “It is a tough decision to leave, but we are extremely excited about the opportunity in Hondo. My wife and I both have family in the San Antonio and Hill Country area, so getting closer to them will be great for both of us.”

Cary also referenced the dedicated Pirate coaches he has worked with since 2014.

During his tenure as head coach, Cary compiled a 36-31 record and guided Crandall to the playoffs the past five seasons. Last year, the Pirates finished 10-3 and claimed the District and Area Championship for the first time in 28 years. The Pirates lost to eventual state champion Carthage in the Regional Semi-final round.

Cary was also involved with construction of the new multipurpose indoor practice facility set to open with the beginning of school.

“It has been a great six years in Crandall,” Cary said. “My family and I will cherish our time and the memories and the relationships we have developed here. The Pirates will always have a special place in our hearts, and we will always be cheering for the Black and Gold.”

Crandall ISD superintendent Dr. Wendy Eldredge said Crandall ISD wishes Cary and his family the best of luck in Hondo. She and the board will soon begin the search for a new head coach to build on the foundation that Cary has helped establish.